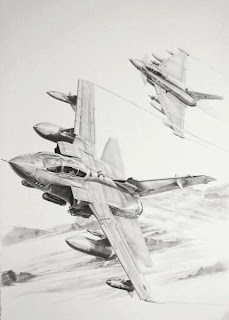 It seems a good long while (well two years to be precise) since I posted on this blog. So maybe a good time to start again!!!! So here is a recent work "Operation Ellamy". This original drawing sized at 16x22 inches is for sale.... Please feel free to email me for details at jamesbaldwinart@hotmail.co.uk
No comments: 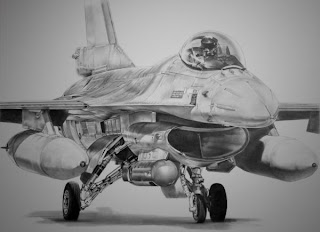 It is not just aircraft that I draw..... I am particularly proud of this portrait, completed yesterday 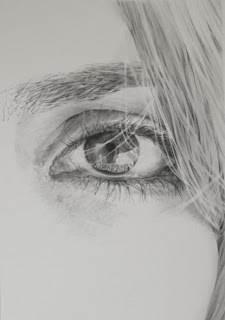 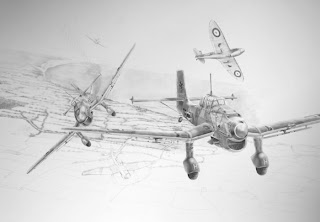 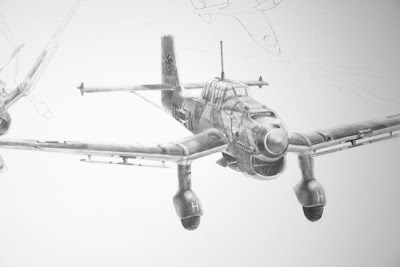 This latest work shows Ju-87's on a raid over the south coast of England in the summer of 1940. 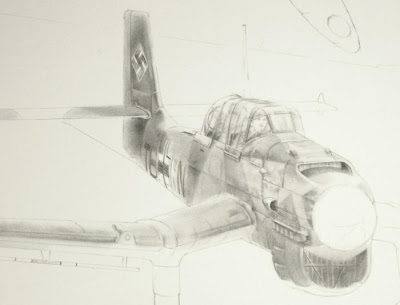 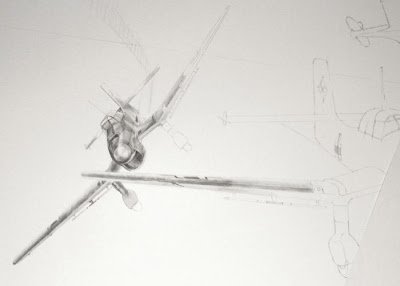 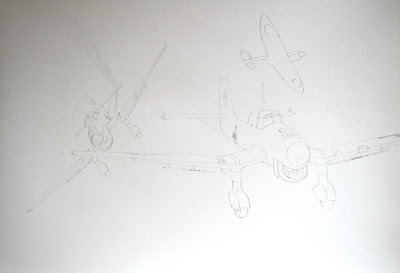 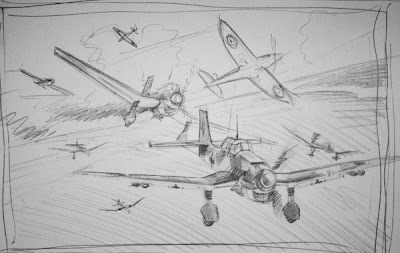 The final piece in the 74 Squadron series.......
Hawker Hunter
Surely the most beautiful jet aircraft ever built!
For price and details on this or any other piece of work, please contact me at james.baldwin@homecall.co.uk
No comments: 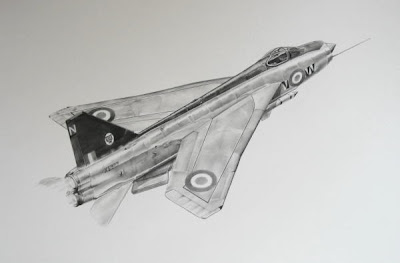 The second of the 74 Squadron pieces
No comments: 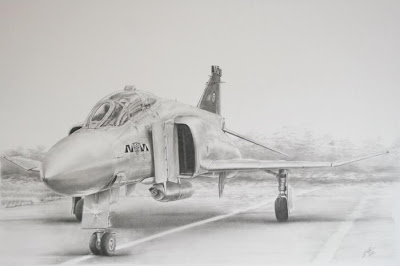 I have been wanting to produce a Phantom, Lightning and Hunter for a while now. So I have had the idea to do all three as a series by showing them as aircraft of 74 Squadron. The Phantom is the first to be done.
This drawing which measures 21x15 is now for sale. For details, please email me at james.baldwin@homecall.co.uk
No comments:

Here are the completed pieces from the commission for the Joint services Cpmmand and Staff College. Delivery took place at the weekend and the initial response was excellent. The three paintings will be hanging in the Cormorant Bar at the Staff College. They are in truly exulted company! I feel truly privileged to have my paintings in such surroundings. 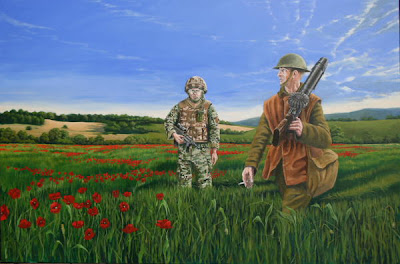 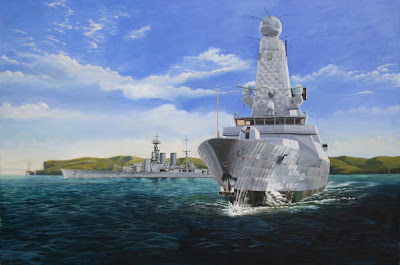 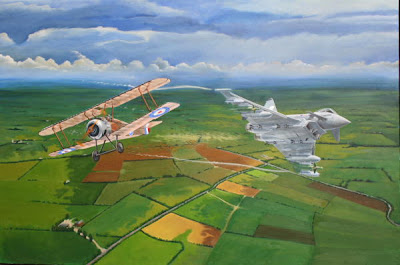 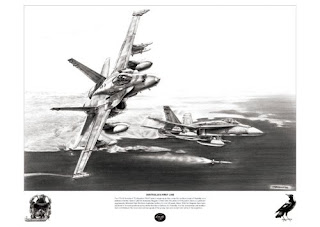 Commissioned by 75 Sqn RAAF, Australia's First Line depicts two F/A18s over the coast of Northern Australia, the home turf of the Magpies and is available as a limited edition print.
Each print in this run of 250 is individually numbered and signed.
22X16 priced at £50 and p&p
For details, contact me at james.baldwin@homecall.co.uk
1 comment: 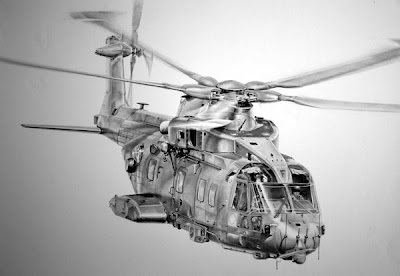 Nearly there after TWO years
No comments:

Portrait of a Mustang 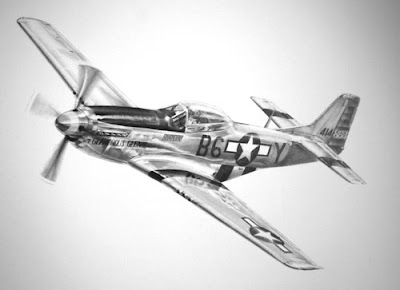 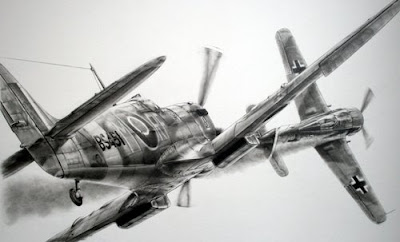 This is the latest drawing, showing Flt Sgt Chudek of 303 Sqn downing his second Fw 190 of the day on 17th August 1943. If you are wondering about the title, see Roy Lichtenstein (pop artist) and you will know where I'm coming from. This drawing 20' X 12' will be available as a limited edition print very soon. Please email for details (see profile for email address)
No comments: 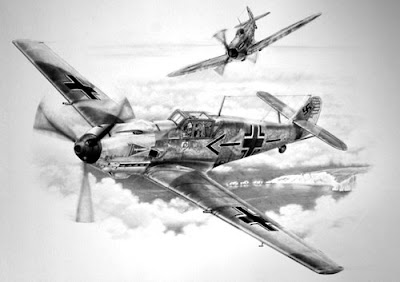 On the afternoon of Nov 28th 1940 Helmut Wick, commander of JG2 'Richtofen' Geschwader, scored his 55th victory over the Isle of White. He was playing a dangerous game with Werner Molders and Adolf Galland, a competition to see who could score the most! At this point he had drawn level with Galland and ahead of Molders but on his return to his French base he learned that Galland had claimed #55. He refuelled and rearmed and at 1530 led his Stabschwarm back to the Isle of White. Here they met spitfires of 609 squadron. Wick soon scored number 56 thus becoming the Luftwaffe's highest scoring ace. The victory was short-lived as the spitfire of Flt Lt John Dundas dived in from the west at an oblique angle taking the Wick by surprise. The eight browning machine guns hit Wicks engine and forward fuel tank and a second burst destroyed the tail surfaces..... the Bf 109 was doomed.
Unfortunately Dundas was unaware that Rudi Pflanz of the Stabschwarms second Rotte had come in to protect his commander and he fell to the Germans cannon almost immediately.
No trace of Wick or Dundas was ever found.

Just a quick note regarding the Bf109. Every other painting/drawing that I have seen of Helmut Wicks aircraft has a yellow spinner but after weeks of research I found a photograph taken the day he was shot down. Now, the photo isn't too clear but it does have a black spinner or at least dark green (or blue?). This could be due to degradation of the photograph but I don't think so as the rudder is very bright and light in tone. Apologies, therefore, if the image is not entirely accurate.
No comments:

A Couple More From The Archive 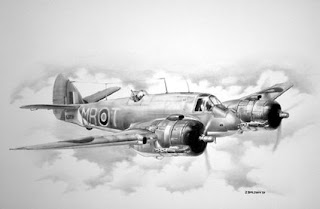 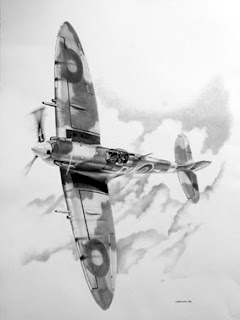 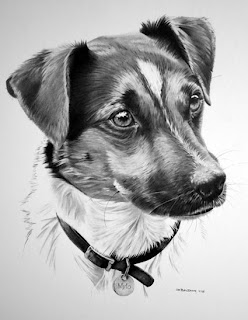 I was recently asked if I could draw young Mylo before he went gray...here's the result. It is quite therapeutic to do something different and I'm quite chuffed with the results. I think as long as the eyes are right then the rest just falls into place....
Anyone for a pet portrait?
1 comment: 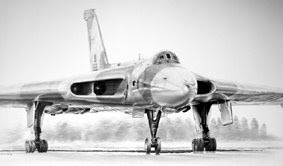 The Vulcan is finally flying again....but for how long?
No comments:

Here are three drawings from the archive. Two are Tornado GR4s
and the other was drawn from an image supplied by Baz Roberts taken before he summited Everest.
2 comments:

I hope that you enjoy the artworks on show here.

Many of the pieces are for sale and commissions are welcome!

Further works can also be found on my website....... visit 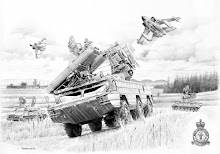